Yalarm tells of the history of Earth and how the Humans were genetically engineered. Before the Fall of Atlantis, there were many races of starpeople coming and going on Earth. Electricity was generated and distributed through grids under the Earth. The grids surrounding the Earth closed up somewhat to prevent the catastrophic energy from going out and affecting other planetary systems and galaxies. This is now loosened to admit the energy from the Source of All; it will raise all life forms on Earth and bring the Golden Age.

The Sphinx in Egypt (it could be a Lion or a Jackal – for there were starpeople who looked like lions – and there were starpeople who looked like jackals or canines) meant a lot to the people on Earth before the Fall of Atlantis. That was the time the Earth nearly died; an Ice Age came, and there was darkness for a time. People lived in caves. After that time, flora and fauna began to grow again and people came out of the caves. There is also a link to Lion Island near Kariong; this was linked to the Lion people who came from Sirius. The starpeople from Sirius came not long after the time the Starpeople from the Pleiades came. 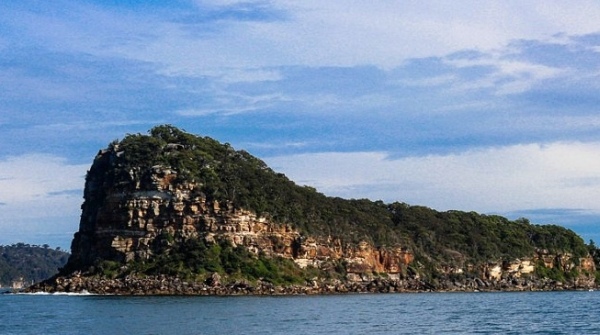 Lion Island near Kariong; this was linked to the Lion people who came from Sirius.

Kariong is to Australia what Alexandria is to Egypt. It is where genetic engineering took place with the up-standing hairy ape and the first humans were created; they were the Australian Aboriginals. (This was 900,000 years ago in our 3rd dimensional time.) The DNA of the up-standing ape is actually centred on South Africa, which, from a scientific point of view, causes confusion. There is also DNA from the starpeople in the human genetic code. The starpeople’s DNA is now becoming activated due the rise of the Earth and all its life forms to the 4th Dimension. However, the scientists cannot find a function for this DNA so they call it ‘non-coding DNA’ or “junk DNA’.

This DNA is inherited from the starpeople; as the Earth has come forth in to a new vibration, humans will once again begin develop their psychic abilities and metaphysical aspects. These abilities were always with them – although mostly inactive due the density of the 3rd Dimension – and there was insufficient light to progress into and activate the (junk) DNA which humans had inherited.

In those days there were many starpeople coming and going on Earth. There was the up-standing ape like creature which evolved into the human with the help of the starpeople; they had part of their own genes, and part of the starpeople genes. They became “crystallized” with the Christ Light – that made them human. There are other interactions with starpeople further down the track – something like 200,000 years in our time – (time is faster in the 4th and 5th Dimensions) that were more evolved and more genetically advanced. So there are differences in the genetic history; it is not the same for all humans, it is not the same for all starpeople on this Earth.

At that time crystals were used for generation of electricity; not the same as we have now. It was conducted through the pyramids. There was free electricity all over the Earth. There were no power poles nor lines with energy points going from one place to another. There were grid lines slightly under the Earth, patterns under the Earth which were used to spread the unlimited power around the planet. This could be done on Earth now, but there is more development needed. Re-activation of “Junk DNA” will bring back the memories of how electricity was generated and distributed; it will happen again.

There is a magnetic force or crystal (a very large crystal) in the centre of the Earth. The grid lines under the Earth were magnetised by that force; it also went out and enveloped the Earth with another set of grid-lines which exist like a net around the outer Earth – you could call this a “Stargate”. This grid-line was “tightened” (or closed) when Atlantis fell so that the catastrophic energy would not go out from the Earth and affect other planetary or solar systems. It is now being loosened and opening up so that the new energy coming from the Source of All Creation is coming onto this planet through the stargates which trammel the new energy onto our Earth planet.