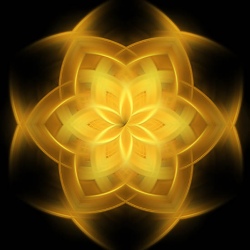 Those that we call “starpeople” are actually light beings existing in other dimensions. They existed in the higher dimensions we had here on Earth. With the Fall of Atlantis, the Earth peoples fell out of the 4th and 5th Dimensions. The light beings and star peoples from different races in the Universe embedded higher vibrations and light in their children by Earth peoples. This gave rise to so-called junk DNA which has come back into its own, due the return of Earth to the 4th and 5th Dimensions.

Yalarm confirms that The Hierarchy sent the Arcturians to Earth to help the up-standing ape, the pre-humans, to evolve into beings with the light within them. There was genetic engineering; for the Light Beings and the civilisations of Atlantis did not have “earth bodies”; they had light bodies. The Nords – those from the Northern Hemisphere had very, very white bodies – there was a shade of blue about them.

In addition to the race from Arcturus, there were the Hathors, (a group of interdimensional, intergalactic beings who originally came from another universe through Sirius – which is a portal for our universe). They had strange looking ears – for they were able to communicate telepathically. There was a lot of intermingling between starpeople and the Earthlings; their hair changed colour, their skin changed colour: there are mummies in the Egyptian Museums with Blondish hair – or even ginger hair.

The Starpeoples’ genes came with Light and vibration. When reproduction happened it was actually a “quickening” of the egg in the womb of the mother – and it became embedded with Light. This developed more ability in the children of the starpeople by earthlings, and the children had larger heads. Much DNA which is called non-coding DNA (or Junk DNA) actually originates from the starpeoples. We will become more aware now that Earth has raised into a 4th and 5th Dimension. It has more reality there – it has more form – it is actually stronger than what exists in the 3rd dimension.

Light becomes stronger in the different dimensions; and there are different dimensions of light as one approaches the Source of Light, the Creative Source of All. It is all power; there is an increase of power on the Earth now due the turning point – the Solstice of 21 December 2012; the residual genes from the starpeople (non-coding DNA … so called ‘junk’ DNA) is now beginning to flower within the human. The basic vibration on Earth has been raised.

The question of people having a higher vibration than others is considered; the role of emotions ~ emotion is putting something into motion; and the quality, vibration of what you “put out” into the world determines the vibratory rate of humans. Everything is energy. The seen reflects the seer, the perceptions and attitudes within the seer. It is up to the (seer) to choose what they would like.