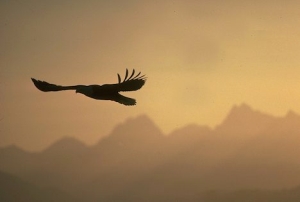 Through the work of Jalarm, the Atlantean, and the lightworkers who do work with the Oracle, the early origins and history of our planet has been recovered. And surprisingly, the bird-peoples, the bird-like race were involved on many levels. They are the progenitors of life forms on this Earth and come from many races in many different dimensions. We bring you an important background to the transmission by the Ancient Eagle Woman.

We have recently received a transmission from one of these Bird-peoples, via the auspice of Cosmic Sai Baba. This transmission came from one who was here many, many eons ago, and passed on information about the formation of the Earth and the role of the Bird-peoples in that creation. Our planet had a special mission (it still has this mission) of being a place where warm-blooded creatures may live, be born into families and know love. Many light beings came to assist the creatures created by the reptilian and lizard peoples, and transform them into warm-blooded creatures, the upstanding-hairy-ape-like-creature who was to evolve (with the aid of light beings) into the modern humans.

Paleontologists, researchers, geneticists and scientists are baffled by the “missing link”, the leap from primate to the human, enChristed with the Crystal light, and finally, homo sapiens sapiens. That term describes the modern human being we know so well, but that second “sapiens” is most important, for it marks the being that has self-awareness, emotion, feeling, and consciousness. And this is what the light beings who visited Earth and did their work – with the blessing of the Hierarchy – helped the hairy-upstanding-ape to become. There were many genetic modifications, many attempts at assisting the early human ape-like creature to evolve to the human, which is why there are so many anterior species of primates and hominoids with DNA from the light beings, the Star peoples. Here, we give you extracts from earlier sessions of The Mystery School, which helps us to understand our ancient history.

Purpose of the Mystery School

The purpose of the Mystery School (among many other Mystery Schools on the Earth at this time) is to recover the lost history of the Human, and its origins, along with a history of the Earth that helps us to understand who we are, where we come from and how matters today obscure our true history. Jalarm has shared that the Earth’s moon was brought here from elsewhere, and that the Earth was moved from another orbit around our Sun to its present place and orbit between Venus and Mars. (This was to enable the growth of warm-blooded creatures.) Moreover, Jalarm and the Oracle have revealed that everything, every form of life, was brought here from another place. Think of that! The flowers, the grasses, the trees, the birds and the bees! We do live in a wonder-world of creation and human flourishing.

This is important, for The Mystery School and the lightworkers therein are charged with a task of helping humankind to understand their origins and so understand their return to the 4th and 5th Dimensions, something which is taking place right now. And we have been told repeatedly, that the light beings, the star-peoples, will return to Earth and begin to show themselves and return to relations with humanity. In peace, in love and harmony, in cooperation and understanding of the mission of this Planet Earth – a marvellous mission of being a place where light-beings and Star Peoples may take birth and experience love.

The Light Beings from Venus

After the Summer Solstice 2012

There has been a change, an uplifting, a surge of light energy, and a change in the relationships of humanity, between persons, members of a family, in a town, in a society, and between nations.

The Griffin and the Life-Form called Dragon

Jalarm has given account from time out of any memory about the Bird-like beings and their role in here on Earth, and how the DNA was shared across many species. The Earth was in a different orbit then, and only cold-blooded creatures survived. The group has asked Jalarm a question about the so-called legendary Griffin and Jalarm has asked that some research be undertaken. Meanwhile, the trio ask The Oracle questions about the relation between the Griffin and the Reptilians. The replies and further questions about dragons have an important part to play in understanding how warm blooded beings came about and led to the Human, the one who is filled with the Hue of Light from the Source.

The Phoenix, the Earth, the Human

You come, you die, and from the ashes you rise again. So each being is a Phoenix – a Being who has risen from the dead – but then some strange stories can be created about that and in fact it is not strange or weird. . It is a fact. That you come and you go – you rise again – and you fall back – but in each rising and falling back you raise in consciousness. You understand this – and this is what is happening to every thing upon this Earth that was first created . shall we say, by the Phoenix.

How the different races of Starpeople were here:

The Earth Energy and the Bird-like Beings

Jacqui: We are told that there were bird like beings that assisted in creating our planet a long, long time ago. So could we know more about the bird-like people? And also, the being known as Thoth – and is shown to look like an Ibis – was Thoth one of those beings

Jalarm: “Well I could say, “Yes, Yes, Yes!” for all those questions, indeed. The Bird-like beings – well if you think of the birds that are on this Earth – they actually are genetically connected to them. Like all forms of life, there has been a sharing of DNA and yes, the beings are bird-like to look at in a way. They have a snout (or nose) that looks like a beak. They have eyes, and they have an ability to hear and I would say that the skin is covered with what I would say is a light, feathery, fluff type appearance on the skin – which, when used to create birds upon this planet – it actually was of a heavier and denser energy and so it is tough to some degree – if you were to compare the birds on Earth with the bird-like people. So does this make some sense?

Jalarm:There were many, many, many different stages of development of your Earth to be part of your solar system and this is going back trillions of years. But the measurement of time is different when it was first created, from what you have here on your earth now – so it is not a good idea to talk about time in that sense. But understand it was a long time ago.