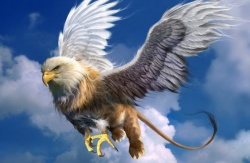 The Mystery School is meeting and Jalarm has given account from time out of any memory about the Bird-like beings and their role in here on Earth, and how the DNA was shared across many species. The Earth was in a different orbit then, and only cold-blooded creatures survived. The group has asked Jalarm a question about the so-called legendary Griffin and Jalarm has asked that some research be undertaken. Meanwhile, the trio ask The Oracle questions about the relation between the Griffin and the Reptilians. The replies and further questions about dragons have an important part to play in understanding how warm blooded beings came about and led to the Human, the one who is filled with the Hue of Light from the Source.

We asked the Oracle about the DNA from the Bird Race: Was it taken without permission to create the Griffin?

The Oracle: swung into action and the wine glass moved very quickly to knock the label YES and kept pushing the label so it nearly went off the table. That meant to us, a very definite YES.

Valerie: said that when it is taken without permission from the Source it hasn’t received a blessing. But as Valerie spoke the wine glass moved by itself and said NO. So we explored a little more.

Jacqui: said the Griffin was once revered by people – then the Oracle made it clear by going, around, and around in circles that it wanted to have a BIG chat through Val.

Jalarm: ‘It is I, again, and I am very pleased that you have had this conversation about the Griffin. Valerie was thinking that it was created without permission from the race of the Birds and that is very true. However, it was eventually blessed by the Source from the Creation of All.

There have been many happenings through the ages – through the Universe and through your Galaxy – of different races that have inter-blended their DNA or their genetic material to create another race. A bit like what has happened with you when you were first created as human.

So with the Griffin – it was developed and a race was formed to go on to find the blessing from the Source, which was given by the Hierarchy and from that place the race of the Griffin (because there was a race, not just a being itself) was able to enter into the foray of helping to spread the Light throughout this corner of your galaxy. Does that make some sense?

(All agreed it does.)

Jacqui: I was going to ask a question and I find thoughts running madly – are you putting thoughts into my head? (much laughter) 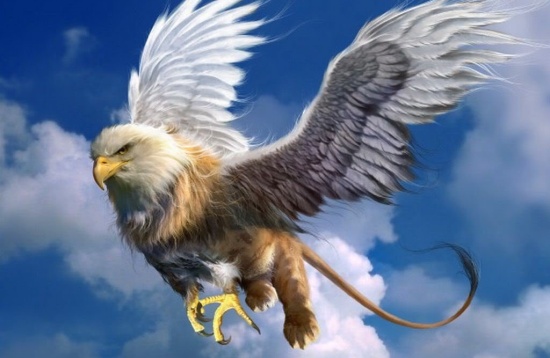 The griffin has wings, claws, feather like skin with softness of fur

Jalarm: Good – because a Griffin actually comes from many races. It has wings – which is a bird-like being – it has claws which is again a bird-like being but also Reptilian and it has a feather like skin which also links with the softness of fur that also comes from the Lion people, as you can see. The Lion people exist in another corner of your galaxy and they have – in fact you have been given much information about their role in society. When I say society I mean the collection of races that exists within your Universe – your Cosmos and this is helping people (I hope) to realise that this Earth and the people on it, are not the only Universe. I want to help people to come to realise that there is much more within your Universe, your Cosmos. They all inter-act.

There are also the ones who are waiting, in a soul form, that are waiting to come into a human body to experience the life of what you do here on Earth as a human. For that is a much later stage in evolvement. So getting back to the Leonines (the Lion People) they are, of course, part of the Griffin. Does that makes some sense?’

Jalarm: ‘And the Leonine people are very warm, loving beings – and there is much of the Lion family, the cat family that exists upon this Earth and you know the kind of energy that comes with them. For they can be very loving and very gentle but of course, if angry or hungry there is a twist to their tail in how they treat other things around them. I will not go into this for the moment.

Jalarm: OK. So the Leonine people have also considered themselves to be like the policemen of the Cosmos and this has been written about in books also. So is there another question?’

Jacqui: Another question from Chris … When visiting Wales people will encounter images of dragons everywhere. Do dragons still exist?

Valerie: added: We saw a lot of images of dragons in Denmark also!

Jalarm: As I have just explained, there have been many races formed and created.

And when you think about the dragon – it is very reptilian – but it has wings and that of course, immediately connects it to the bird race. It also has fire – and I would like to remind people that the fire exists in your Sun and many places within your Universe – but there is two aspects to the Sun – one is to destroy, to break down the unwanted but also – there is fire that gives warmth and heat to life – to the warm blooded creatures that have been created.

And this is a raising of energy – a raising of consciousness and it is what is leading to Universal Love. For Love is an energy of warmth, caring, consideration, humility. But also, one to understand what it feels like to have suffered in some way and also a feeling of being hurt. Some of those feelings are totally foreign to a cold-blooded being. And so that is another reason why there is a queue for people to come in a Soul into a body of a human. That again is a much later development in the Universe. Does that make some sense? Is there something there that you would like me to qualify?

Jacqui: The only thing I think about, is why do we incarnate into this physical world? Why do we have to take on a human body? … …

Jalarm: Well, I have just explained: A human has family which immediately comes into the creation of a child with family – because it doesn’t come alone – it has to come through beings upon this Earth. And they are immediately connected in energy to that family – and from that – hopefully there is a bond with that family. And they begin to learn and understand about the warmth of love, of caring, of interaction, of marrying – to perhaps marrying another to experience a life together from which they learn from each other – produce more children to give opportunity for more souls to come into this world. It is an on-going thing. As I have said, a lot have come from cold-blooded races and they have not experienced these things at all. Those emotions – the warmth of a sentient feeling of a human. Does that make sense? This is the reason they come and there are many waiting to come to experience this.

I would like to add also that the Dragon (for want of a better word) that they were created much like the former ones mentioned – the Griffins – but a different race again and also they were accepted by the Hierarchy and blessed from the World of Light. There is a similarity I would like to say, in a way, about the spine that exists in the human and the spine that exists within the reptilian races and the dragon. The Dragon is very much connected to a snake-like being – but there is a spine and there is a tail. And of course the human shows evidence of once having a tail. The human is actually an evolved creation and it is very interesting from many, many many different races from around the Universe – and so the Dragon is held as a sentient being but one that can embrace both the cold blooded and the warm blooded beings. The warm races that exist – and that is in the fire within and also the leathery skin and the wings and there is much within the dragon that represents the human and its beginning. Does that make sense? Because the human in its beginnings was from a race known as ‘MAN’ – it was very experimental and was not always blessed from the Source.

Humans have gone on to being a LIGHTMAN and it has been blessed from The Source, The Source of Love and Light. Does that help you.

Jalarm: Sometimes there is a story of -shall we say – Saint George and the Dragon. And there is a winning over, or mastering the heavy energy represented in the heavy skin that is leathery like and the fire that can destroy. Anger if you like. Or the fire that just destroys without any feeling, any emotion. If you can take your imagination just a little further you can see that story is symbolic of you as a human and what you are doing is – you are overcoming those influences from the dragon – the fire, the anger, the cold-bloodedness without feeling, all those things need to be mastered to become a God Being from the Source from which you come. Does that make sense? 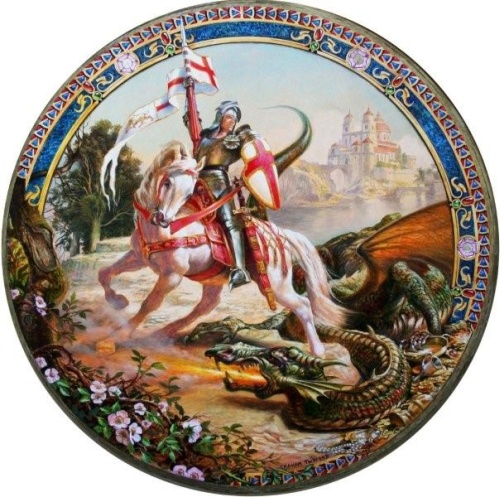 St George and the Dragon

© The Naryana Oracle. All material may be reproduced provided the source is cited, and it is not altered