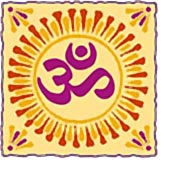 Group: The three Harmony Sisters had a visitor today; First we chanted the OM together to bring harmony; and then called upon Jalarm to bless our meeting and we welcomed his presence.

The wine glass moved strongly to show he was present then made anti-clockwise circles which we have come to recognise as meaning he wished to speak through Valerie.

So now if we can proceed I would be very pleased to answer if there is any question that you may have.

Jacqui: We were talking about the civilisation and the societies that existed before the Fall of Atlantis, and did they use barter or money as a means of exchange? ?

Jalarm: You were speaking of the so called migration before the so called Fall of Atlantis that went down and the Ice Age was around that time also – you are talking about civilisations that existed before that time and which I know you refer to as a time when records were lost. I would say that yes, there were races that used money in the sense of coins to barter and to pay for or to receive. So is there anything you would like to ask about that?

Jacqui: Do you have a question Chris that you might like to ask? Chris replied: How did the community care for one another and ensure that they were always supported?

Jalarm: We are talking about Beings – shall we say – that are races that were living upon this Earth in previous times and they had gifts and abilities that were lost by the so-called humans. And I say Human, because you understand about the Light Man who went on to be created from Man. All coming from EARTH. So you could say the “Earthman”.

Now I am referring to the star people that also lived upon this planet and this is what you are asking – did they have money for exchange, is this right?

Jalarm: Then, it depended upon them as to which star people or race we are speaking of. The ones that have abilities to create – or how can I put it – if I can remind you in the way that Sai Baba created his life on this Earth. Sai Baba did not really need anything – He said so. And this is what he was meaning – He did not need money, because He could just manifest anything He needed – Do you understand? (Yes) And so the star people from a certain level of wisdom, knowledge and Light are able to do this. And so there was no need for money – does that make some sense?

Jalarm: Is anything else you would like to ask?

Jacqui: O.K. The next question that Chris has is about the role of Hanuman – Is it still continuing today i.e., the protector of the Earth?

Jalarm: Indeed so, indeed so – again I would refer to Sai Baba; Cosmic Sai Baba is here – you know that – because Jalarm is part of an aspect of Him and is focusing mainly on Atlantean Times.

Jalarm: But I am speaking now from Cosmic Sai Baba and I would like you to know that … … How can I say it … … (then he said I will have to withdraw for one moment) Just one moment;

Valli: notes that “the channelling had suddenly stopped and I couldn’t understand it – it had never happened before – and then I realised he wanted me to turn the recorder on! I had neglected to do that.

(We were chatting trying to work out why the channelling had suddenly stopped; at the same time we were prompted to look at a photo of Sai Baba. When we turned it upside down and covered his face from the eyebrows and we could see an image of Hanuman hidden there)

Then as we were speaking Yalum made his presence by jumping in and taking over Valerie’s voice box:

Jalarm: “I am here again my dear, and I was concerned because you had not turned on your audio system – and you understand that now. But what I was going to say now was that Cosmic Sai Baba actually – or at least Sai Baba, when he was on Earth – explained and often changed his form in front of people to explain something or to give an understanding and this is what I wanted you to understand: that this here on Earth is not the reality and that there are many images given by us to explain things—many things are virtually the same energy but a different image. Does that makes some sense??? Because in religious teachings we, from the world of light, have actually done this so there would be an understanding.

Sometimes people would not understand a certain image and so we had to change it; does that make sense?

Jalarm: And so this is what has happened with – shall we say – in the age of Sai Baba and the age of Hanuman and many other aspects from different ages, like Yalarm if you like. But that is a very limited aspect of Sai Baba. And so what I am trying to say is, that Sai Baba is actually, if you remember, the words mean Mother – Father. Mother Father God from the source of all creation and I would like you to think about that when I say the words SAI BABA because I am talking about Creation – and the difference in the images is what is right for your understanding or some other person’s understanding on their path of Enlightenment.

Am I explaining myself? 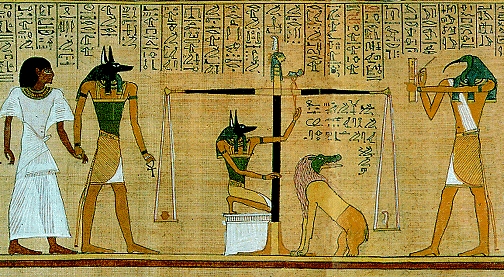 The crocodile-headed god of Ancient Egypt judged the souls of the dead;
In Ancient Greek myth, Charon would ferry the souls across the River Styx for judgement. 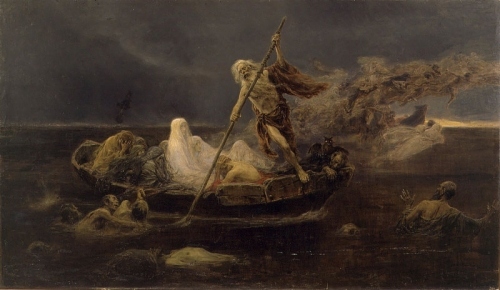