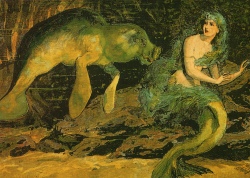 The sessions with Jalarm and the Oracle continue as questions take a turn towards the guardians of the planet who moved through the waters, and held the light energy from the Source of All Creation. Other questions explore the evolution of the hairy-upstanding-ape-like being (which, Jalarm tells, was originally a cold-blooded creation of the Reptilians and Draconians), to the relations between the Ape like creature and the being known as Hunaman (Hanuman) to the Dravidian peoples.

Questions are asked about people who lived in the sea – Mermaids and such. Yalarm tells they were different physical beings that had a fish-like appearance, swam underwater with a fin and were a separate race who came to anchor the energies of the Earth, for it did get out of alignment a number of times before the most recent time. They came to ground the light in the sea-beds, the ocean-beds and helped to stabilise the planet.

Yalarm responds to a question about the ape-like beings who were an experiment created by the Reptilians and the Draconian races. There was DNA matter and genetic material extracted from many things and many beings; the hairy up-standing ape creature was cold blooded. There were many experiments; some failed, some did not. They were created to be slaves and to work for the reptilian races. The experiment that was most successful – the one that became Man – or later Barbarian – was the ape-like creature with genetic material taken from the Leonines, the Dracos, the Reptilians. All this was intermixed and implanted into an ancient historical being what was very like the dolphin, the Manakees (Manatees, Sirenians). These were a slightly warmer-blooded being.

The Manakees (Manatees) are a very old race; they were here long before any of the starpeople came, and they held a connection to the Divine Light – they still do this, hold this vibration, this energy and maintain that balance here on Earth.

Another question is about the race of intelligent ape-like beings who could talk; like Hunaman (or Hanuman). This was after the time of the Reptilian – Draco experiments; the upstanding Ape-like creature which went on to become man was in fact enchristed with the light of the Divine Source of all Creation which was Light, Love and Compassion. The ape-like creature became the Hue-man, the one who is enchristed with the light of the Source.

A lot of starpeople races came to Earth to help ground the Divine Light or Enchristed Light and guide those with the Light within, the Hu+man or the Hunaman (which is well known in India). Some stayed, some left.

A clarification is given about Manakees, Mantees, Sirenians and the Elephants.