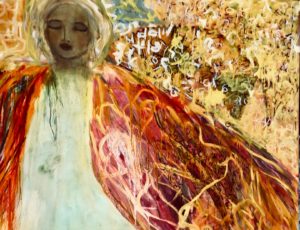 We called upon Cosmic Sai Baba with great love and respect, to bless the Oracle and make his presence known and to connect us to the ORACLE from Andromeda. And we thank him for that.

It is I, and I am very pleased to be here and indeed it is a good time to connect to the “girls” in Andromeda. They are waiting. So without further ado I will hand over the meeting to Daina, Anna and Val. Thankyou.

Then we meditate (each of us ask for any messages from GOD or Andromeda that are relevant to today’s Oracle).

JD Was still thinking strongly about the volcano in Hawaii. How the lava has increased the size of the island. Why is the lava still flowing slowly, what is Mother Earth trying to show us.

We ask who is present? Spells out G O D.

JD asked for more information on the volcano in Hawaii (Kilauea)

It is I, Cosmic Sai Baba, and I am replying to the question you asked my dear. This is ??? on the Earth planet, she is asking and wondering about the volcanic activity in the middle of the Pacific Ocean and the Pacific Ocean of course, is known also for the outskirts of it as being the Ring of Fire, because there are many volcanoes in those areas and many have been erupting recently, but still, the one in the middle, Kilauea, is still erupting, but slowly. There has been a question asked also as to why it is slow. I need to say and reassure people that there are many wise ones that work and help this Planet Earth to (shall we say) conduct itself in a safe way for the humanity that exists upon it. If that volcano in the middle of the Pacific Ocean in Hawaii was to explode (the way it would really want to) it would do too much damage on the whole of the Planet. It would create massive tsunamis and interfere with a lot of life. And so, it has been an edict that the angelic realm from Andromeda has called upon those that are helping the people and the planet itself to evolve to hold back the activity to some degree in the centre of Hawaii, so that which I have just explained, does not happen. As has been reported, by the scientists that they cannot predict when it will stop, it is because we are allowing it to actually overflow to the point where it will be enough to release the pain and the emotions (which I say not lightly) from the planet, which also has a consciousness. It is much that is needed to release from its past evolution. And I am speaking of your planet. And so, if you can, with a little thought, imagine and understand, what is happening.

JJ Saw a huge amount of light, rays of strong white light coming down, couldn’t tell if it was going around the Earth. I just knew it was a huge surge of light. I don’t know what that means, They may tell us. Also saw a lot of symbols as in some form of script (that she didn’t understand). Heiroglyphs? Was it a star language, from Andromeda? Also separately saw 4 very tall pillars of blue light.

(She also used to often be woken in the night in the 1990’s to see similar script (temporarily) “illuminated” on the bedroom wall, as though it was gold script on a black velvety background. It was very beautiful. Looked a little Islamic – but she knew it was a star language. She could never decipher the “writing”, but had a knowing that at some level she “knew” what is was about. This was a period in her life when she would be “taught” during her sleep, by way of dreams and astral travel. Now the same writing is coming through again, in paintings and language.)

WE asked if what JJ was seeing was “real” – the answer was a strong YES.

We also asked GOD if the pillars of blue light were some sort of angelic structures? A very big YES.

Are they some sort of “Guardians”? Another YES.

Do they keep the space sacred? Yes, but they do more.

VB Andromeda Val prompts Valerie to speak in her own voice with this response: – As soon as I closed my eyes, I saw a pyramid, it’s a bit like that with the pillars of light, its like every sacred structure has pillars of light around it. North, South, East and West, depending on relativity and what its connecting to. In other words, it could be different or seen to be different but it’s not to what it’s relating to. So there’s one specific place or being or even where you come from and also North, South, East and West is to do with where you come from and where you are receiving the messages. So in that case, when you call upon Andromeda it was actually giving you the connection of the sacred place and creating the sacred area , the star world and the raised consciousness to receive and work from that place, which is above that which exists at the moment on Earth. Which for you connects you to Andromeda and many other places, not always, but depends, …

JJ Also wants to ask about the shower of light she is seeing, that seems to be some sort of protection or healing for the Earth, an extra “charge” from somewhere? Is that happening?

JJ Is that from some sort of Star Council? YES.

We discuss amongst ourselves how everything we have seen as a group tie in together. We ask the Oracle – another (very big) YES.

Any other questions? Or is there a message for us .. Yes they do

They ask to speak through Valerie

Finished at 4.33pm!! – They had asked us to keep our meetings to 1 hour. It happened organically.