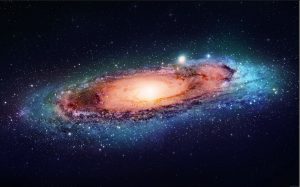 Of late, much information has come through the Mystery School about the planet Earth, its origins, Andromeda and shewings of people, life that lives on the stars. Andromeda is a galaxy in our Universe, much like our Milky Way, and in fact, it is adjacent the Milky Way. The ladies of the Mystery School have been meeting for many years, and at present, are connecting to an Oracle in Andromeda, which is representative of the future of humans. Here, we bring you some extracts of transmissions about Andromeda and the colour Magenta. We also share information from the Cosmic Sai Baba on Andromeda and Magenta

Jacqui: Wanted to ask one more question – Valerie felt she came from Andromeda or ??

The Source: (God) Are you talking about Valerie?

The Source: (God) Yes, at another time she has lived there and worked there and, yes, it is the same place that is spoken about as Lyra but it is Lya – it does not matter really. It is connected to that area and that way of thinking. That consciousness – that understanding all those things that Light Workers bring to this planet. Earth is a very dark corner of your galaxy – but that is changing – that is changing.

Jacqui: Before you go – is there some way we can merge with the Oracle on Andromeda?

The Source: (God) “That is a good question My Dear – and you are already merging of course. But you are looking for messages from Andromeda perhaps???

Jacqui: That is very true.

The Source: (God) “You could say, that the message I have just given you comes from Andromeda. I have a little pronouncement sometimes … … And so My Dear there has been times when you have lived and worked and incarnated into Andromeda. This is a place from where you have come from more recently. Other times you have been in many other places.

The Source: (God) Valerie has talked about the Oversoul which is important. For it is that – that links you to the Creative Source of All which is GOD. And from that point you are coming individually. Notice I said individual – so although you are separate – you are together as one. Does that make sense? Sometimes it is hard to experience or think about anything that has not been separated because you live in the world of separation. But this is why you are here – to help those to understand who they really are and where they really come from.

Group: We then closed the meeting and singing 3 Oms again we found we harmonised beautifully.

I say this with love, because there are many Light-workers in this room and there are many light workers that are around the world AND they are totally committed to working with us.

And I would like to say we come from Andromeda.

This is the next Galaxy from where you are but we have always been with you. We have always worked with you and tried to assist the evolvement of what is taking place upon your planet Earth.

For, we at the Angelic Realms – in Andromeda – helped to put the planet together in the first place, in your solar system and your Galaxy, the Milky Way.

So My Children, we have made this announcement now and we want everybody to know this. We also want people to know that the human race that has been created upon this Earth – has in what you would call a ‘hybrid way’ evolved and it now exists in Andromeda.

If you talk about time, from your point of view, it is 6,000 years ahead. BUT there is no separation – communication can take place telepathically; and because your frequency upon the Earth Planet is now raising we are able to come closer in our ships to visit, and this is what we want to do.

We have already announced in many places around the Earth now, that we want to present ourselves and to make it known that people exist in other worlds, in other dimensions – they have always – and that the little Earthling is not the only one in your Universe or Universes!

So I would like you to think about that.

I have said on another message that I have given, that I would like you to research ANDROMEDA and find out more about that Galaxy. You will find it is very, very large – much larger than your own galaxy, the Milky Way. There are millions of Suns there.

There are, equally, millions of beings – in different life forms, in different shapes and sizes – but they exist.

I would like to say from where I speak now – it is a different dimension from where you are here on this Earth in this room – BUT there is no separation – otherwise this communication could not take place!

There are many workers that have come from Andromeda into an Earth body. It is written of the 144,000 that are Light Workers and many of them are YOU. You will know in your hearts. I have asked you to connect to the colour Magenta which is a DOOR. And from there you will come to understand more about not just the Source of your Soul, but your OVERSOUL – and that can be related to Andromeda.

From: The University called Andromeda

The Source, God, then went on to say:

The Source: (God) “It is God. And I speak from The Source of All Creation. You ask about Andromeda and you already know that it is another galaxy. There are teams of life that exist in many galaxies – Andromeda is one of the United Planetary Nations that have joined together to help the little Earthling to evolve upon the planet and to raise their consciousness and to raise their Light.

The Source: (God) Andromeda is a place of Love and Light and learning – it is a school. There are others that come from other planets in spirit to the school in Andromeda. There are nations that exist on other planets and so you could call it a University. However, is the ideas and their ways of teaching in healing and assisting others that is filtered through to the little Earthling – through their Soul – there is a consciousness that infiltrates into their brain in the earth body and allows them to raise their consciousness. And once the consciousness is raised it automatically infiltrates their whole body so that they change and they are uplifted and their thinking is very different as it is raised in frequency.

The Source: (God) Andromeda has made its presence known to quite a lot of Light Workers upon this Planet Earth. And the colour that is shown has been spoken of this morning, in this bright essence of pink – almost red but not quite. It has been described as Magenta and it is the energy that lifts the hearts of ALL SOULS upon this Earth and is readily connected to Andromeda and the surroundings of that part of the Galaxy, to assist. There are many that have taken upon them to actually connect – just that has happened with you three and now set up an ORACLE that is connecting with another ORACLE that exists in ANDROMEDA.

The Source: (God) And that pink , that magenta light is an energy as is everything is an energy.

I have spoken about ANDROMEDA and it is your next galaxy. And I have linked it with the colour MAGENTA. This is like a door – this is an energy and a vibration of a colour that does not exist in your rainbow. BUT it is a way of focusing and becoming aware of an intelligence and a dimension that exists in Andromeda.

The Beings are more Androgenous and I would like you to think about that.

I would like you to know – and I have said this before – that the knowledge that exists upon this planet (Earth) has come from elsewhere – it did not begin here upon your planet.

The early teachings of religion have come from Andromeda. This is the Ancient Ones. And then further knowledge was given – and then of course, unfortunately, it has (caused) separateness in people who are here upon this earth planet who have seen it (their teachings) as separate and different and the only one. This is a big mistake, of course.

For, it (the teachings) have come from the Source of All Creation – THERE IS NO SEPARATION.

There are different races upon this Earth that think differently, they have different cultures but their Earth body is the same. And so it is too – from the race – they are all the same – and the race has been uplifted as to what we have referred to a MAN and with some animal qualities within in him or her – and this has reached out further to the HUE MAN – a man of Light. And this is the Missing Link! This is what you are and one that you need to think about – as to where you have come from – and when you go from your Earth Body … … …

And there is a race that is advanced from the Human Body that you are; and that exists in Andromeda.

So this is an ANNOUNCEMENT that the Beings that would like to come from ANDROMEDA and make themselves known are very similar TO YOU in the way they look – and that would perhaps make it easier for the human race to accept us. To accept the Beings from other Worlds. Not looking so very different – but rather an advanced state of consciousness and culture and living and knowing and – shall we say – wiser.

I have said enough for today but I do hope that you will do some more research into ANDROMEDA and that you will be more aware that it is coming from us at this time with influence of the Magenta colour.