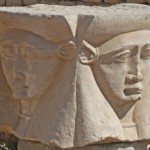 Yalarm tells us that the red-haired mummies in the Great Museum of Cairo had links with the red-haired giants from Mars. The Giants were in Egypt and were called Hathors; they had ears that let them communicate telepathically. They also brought their religious beliefs, ceremonies and rituals with them.

Yalarm goes on to share that the red-haired giants from Mars had a war-like nature and were still evolving. There were many starpeople at different stages of evolution; there were others who were still more evolved and could reach up to the Angelic Realms. The beings from Venus have been helping with the evolution of all the life forms on Earth. They are here, helping now, with love, and will continue to do so. Yalarm tells that Jesus Christ was the Son of the Source of All Creation, and he also, is assisted by the beings from Venus.

A question drew attention to some of the mummies in the Great Museum of Cairo that have red hair. Yalarm indicated this was on account of an inheritance of from the starpeople who lived on Mars. They (the beings from Mars) were giants, and the Egyptians called them Hathors. They had odd, horizontal ears – and this indicated that the Hathors communicated telepathically. Telepathy was the normal means of communication before Atlantis went down.

Yalarm gave some background on the Hathors and their memories: The Hathors influenced the Egyptians as they drew on their memories of what went on before Atlantis went down. They had a lot of religious beliefs (which many would call pagan) but they were very real beliefs to the beings and peoples that lived on Earth before Atlantis went down. Although they were born on this planet Earth, they inherited the knowledge, ceremonies and beliefs that they had from their ancestors. The Earth was like a United Nations of many, many different civilisations populated by starpeoples from many different stars and galaxies.

The Earth was over-sighted by a Hierarchy guided by the Angelic Realms. Yalarm shared that the different civilisations of starpeoples were meant to come here and to take the Earth to the place it was destined to be, a peaceful, light-filled Garden of Eden in this corner of the Galaxy. Those beings that had differences could sit down and listen to another’s point of view and come to understanding of one another instead of resorting to aggression, weapons and war as some were prone to do. The giant beings from Mars had a tendency to fight, for they had a war-like nature. The red haired giants evacuated from Mars because of a war on that planet. Everything was destroyed. The people from Mars were still evolving.

Earth was to be an evolutionary place, where all beings – the starpeoples as well as the Earthlings – could evolve with the Light from the Source of All within. Beings that had this light were Enchristed. The beings living here – the up-standing hairy ape-like ones along with the starpeople from many different places – were still influenced by the starpeoples that came from other worlds; they were directly influencing them. Consciousness was still evolving. If we think of a ladder, then there were some on the lower rungs of the ladder; then there were those who had a higher consciousness and were further up the ladder of evolution. Then there were starpeople higher still on the ladder: they were those starpeople who reached into the Angelic Realms who knew their true nature and where they had come from – the Source of All Creation, and they honoured that. Yalarm indicated that the Hierarchy and the Angelic Realms continue to oversight the evolution on Earth. 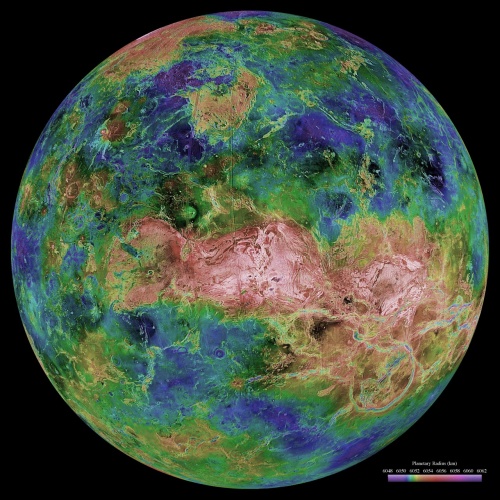 Hemispheric View of Venus Centred at the North Pole

In reply to Questions, the Oracle indicated that there was an Ice Age on Earth; it had begun 1,000 years before the Fall of Atlantis, and lasted around 6,000 of our Earth years.