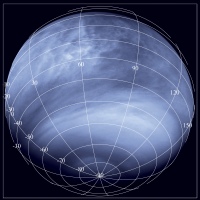 The Spirit Being Yalarm and the Oracle continue to provide information about life before the Fall of Atlantis. The Star Peoples from Venus were here, and among them, were Star Peoples from many worlds and even worlds outside of our galaxy. Earth was a veritable United Nations of Star Peoples (or light beings). Yalarm and The Oracle explain some history of our solar system and the astronomy before the Fall of Atlantis. The photograph is Venus in the Ultraviolet, looking from below the South Pole of Venus.

There are people (beings) that live on Venus. We cannot behold them for they live in frequencies different to our own. It could be light frequency – very low, or very high, too bright for us to perceive. There are different frequencies and different levels of consciousness throughout the Universe. The list could go into the thousands. So sometimes the term is applied to them, Beings of Light, for they live in a light frequency different to our own. On the other hand, we know that Divine Light gives life, and where you have light, you have life.

Our pictures of Venus do now show life exists there, but there are many different scientific reasons which may explain this. It is a little bit like the stars in the sky; we cannot see them in the daytime because of the light; but they are there in the daytime, nonetheless. Earth has fallen from the 4th to the 3rd dimension and is on the rise to return to the 4th dimensions. People will see the beings of light with their earth-eyes; there will be more knowledge and information.

The Beings of Light that live on Venus are a peaceful people who will assist us in the return to the 4th Dimension. Venus is not their home, they have come to there from other places in the galaxy, even outside our galaxy. There is love readily flowing to us from the peoples of Venus and from Venus itself. This is to help us lift consciousness; this love can infiltrate to any place and any person who would like to reach out and open up to it.

There is only so much light that an earth-body can perceive, even in a light body. There are also limits for light bodies. The star peoples came here from Venus, they lowered their light vibration to create civilisation here on Earth, as it was then in the 4th/5th Dimensions.The Star People still do come from Venus and they bring the culture and the understanding and the love that they have for all people – they are God People, they understand the Source.

So the Star People came here from Venus before the Fall of Atlantis, and they gave assistance to and taught the peoples of this Earth. When they mated with them, they again lowered their light energy within them, for the earth peoples still had some of the reptilian/reptoid energy within them and it was this that lowered the light energy. Even the children were lowered in their light, but the light within was raised to some degree from that which the hairy up-standing ape-like creatures had.

Recap: An Ice Age came upon the Planet before Atlantis Fell completely in a day and a night.

There was another planet in our solar system called ON. Light beings also lived on Mars and they came here after Mars became uninhabitable. Once upon a time, Earth had two satellites; well they tried. The second satellite (actually a captured asteroid) broke free of the lunar orbit and actually hit Earth. This was the cause of the Fall of Atlantis. There was also the advent of an Ice Age emerging just before the second satellite broke free; these two phenomena virtually made the planet uninhabitable.