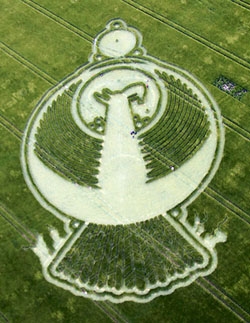 Over the years of Crop Circles being given to the peoples of Earth, some have shown bird-like beings – representations of birds on Earth, and symbols of bird-beings from other galaxies, dimensions and Universes. In this message, we take a look at imagery from crop circles and bird-symbolism from our own civilisations.

There are many crop circles portrayed in this note, and links back to particular parts of the transmission by the Ancient Eagle Woman, particularly about light, language, the language of light and the role of the Bird-like peoples in creation of the Earth.

A crop circle is a sizable pattern created by the flattening of a crop such as wheat, barley, rye, maize, or rapeseed. Crop circles are also referred to as crop formations because they are not always circular in shape. The documented cases have substantially increased from the 1970s to current times

Circles appear mostly on crop farms in the United Kingdom. They are not spread randomly across the landscape, but they appear near roads, areas of medium to dense population, and cultural heritage monuments, such as Stonehenge or Avebury, and always in areas of easy access. Crop Circles and grass circles have been sighted in other countries, such as The Netherlands and USA. 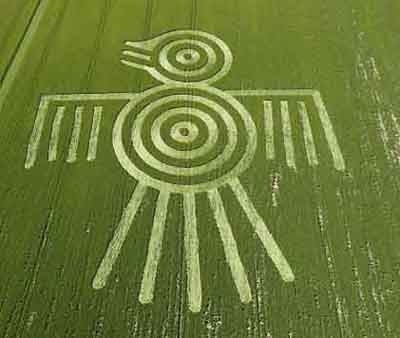 This enormous design, discovered below the Hill Fort of Barbury Castle, appears to be a direct representation of the Aztec Spirit Bird mentioned in Aztec Mythology. The Aztec’s most important Gods were represented as Birds, and were right at the top of their pantheon of gods. Quetzalcoatl himself was also a (Bird – god) and is thought to return in 2012. Once again we have another powerful symbol within the fields with ancient connections. 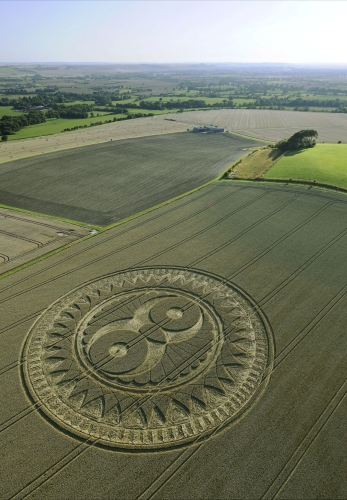 The ‘Wise Owl’ Crop Circle formation appeared at Woodborough Hill, near Alton Barnes, Wiltshire …. Reported on the 10th of August 2009 !

The Owl is an ancient symbol for wisdom and deep inner knowledge of spirit … Taking symbolism from the owl directly, it is noteworthy that it is a creature of the night. Nocturnal creatures are symbolic of inner-knowing, psychic ability, and intuition – so too is the Owl. 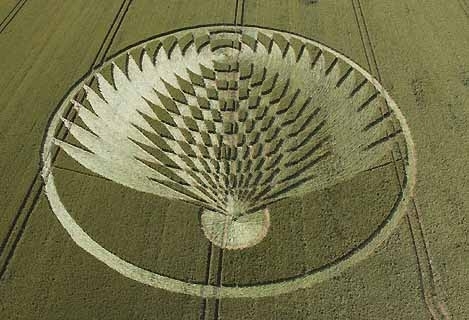 This crop circle is suggestive of bird feathers, and phoenix feathers, as the feathers go to a disk representing the light within, the soul, atman, life principle, which is born, passes, and is born again from the ashes, the same as the Phoenix does. 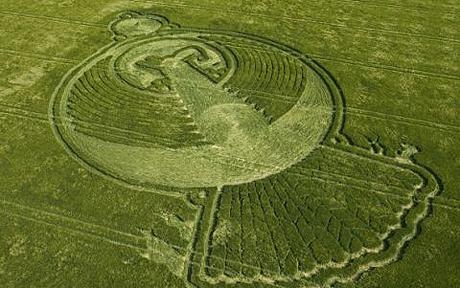 The Phoenix Crop Circle. Jalarm has told that the Phoneix actually existed 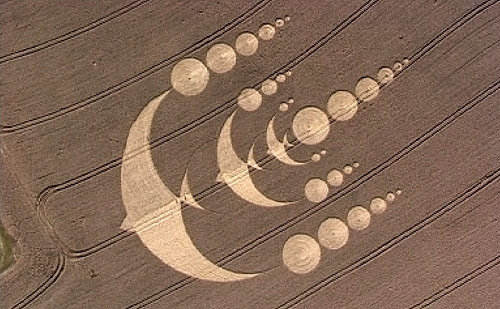 Imagination is the nation of images

This bird circles has disks trailing behind, indicating the principle of creation harvested and gathered by feathers, as told by the Ancient Eagle Woman in the transmission. Disks represent the globules or energy-forms that go out to mainfest as created reality. 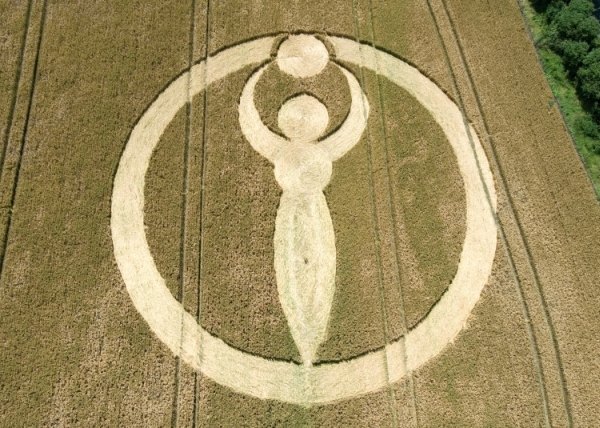 This crop circle suggests the wings at the shoulders, that the Ancient Eagle Woman spoke about in the tranmission. The Circle represents the totality of creation and the Source of All Creation is at the top of the Circle, wherein the Created reaches up to the Source, and takes in the energy of Source for being, for creativity and for Oneness with Source. 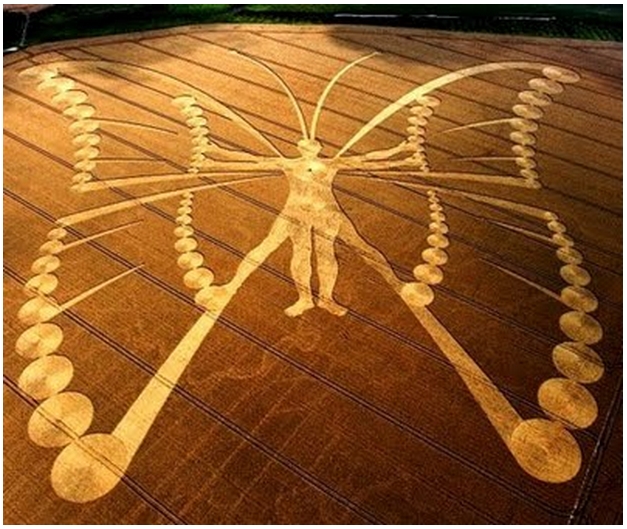 The Bird-like Being / Butterfly Crop Circles, in The Nederlands, 2009

A Gigantic Bird-like Being / Butterfly Crop Circle formation (530 Meters x 450 Meters), the Biggest Crop Circle Ever and appeared in Netherlands near a town in southern Holland called Goes, on the 8th of August 2009. 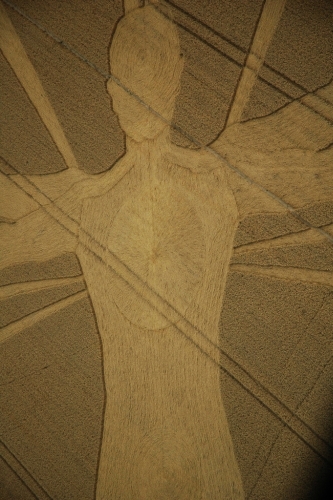 Here is the torso from the Bird-like-Human Crop Circle

Here is a crop from the Bird-like-Human Crop Circle created in The Netherlands in 2009. The Ancient Eagle Woman told in the transmission that the shoulders were where the wings were on the first bird-like beings on Earth. Note the raised circle in the centre of the Bird-like-being indicating the heart, the source of e-motion – which is energy set in motion. The raised circle also suggests the spirtual heart, which is the spark of light from the Source of All Creation, which is within all that exists. You will see that this close-up actually has four arms: 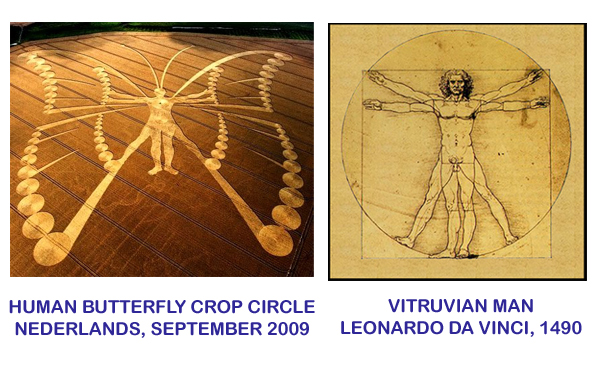 Bird-like Being and Leonardo’s Vitruvian Man: 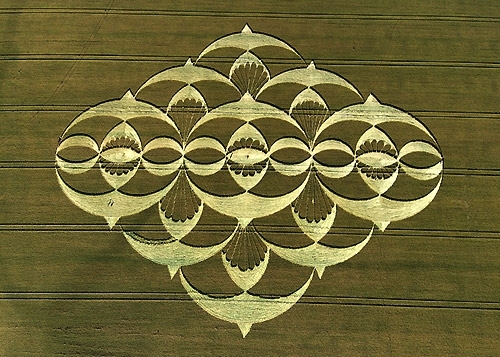 Swallow crop circles appeared at Milk Hill, Adam’s Grave, Wiltshire in August 2003 in wheat; a simple circular formation was created at Wexcombe Down, Wiltshire in May 2007; a double formation of swallows created in two overnight phases appeared in July 2008 in South Field, Alton Priors, Wiltshire. A year later in the same field, a gigantic Swallow crop circle appeared on June 27, 2009 with apparent Mayan-style codex symbols streaming in its wake.

In this crop circle, we see the Birds of eons ago in the act of creation; they are trailing images and symbols from the language of light … which are gathered together by their wings and spread, as shared in the transmission of the Ancient Eagle Woman. Jalarm and other spirit mentors have often shared that communication in the higher dimensions is both by vibration and symbol, or light and vibration. Here, we see the ancient creator birds trailing light symbols – quite possibly the light symbol of E-din (or Eden as we know it). E-din is a vibration of harmony, gathering together elements for a place of peace and harmony. This was the original mission of this planet Earth – and still is the mission of the Earth.