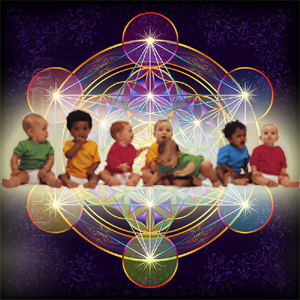 The Mystery School, through the work of The Oracle and Jalarm the Atlantean have passed back information that before the fall of Atlantis, astrology was a very precise science which advised parents about the qualities and capabilities of their children along with the life paths of their children. We have learned that in ancient times there was a 13th Sign in the 360° circle of the zodiac. This sign was known by name spider or “Arachne”. The new generation star children, known as the Rainbow Children, are born under this sign.

Through the the work of The Oracle and Jalarm the Atlantean, we have learned that before the Fall of Atlantis life was vastly different and there were many races of light beings, Star Peoples, living on Earth in harmony. The Star Peoples came from many different stars in our universe, and from other universes. There were many civilisations on Earth and with the help of the star peoples, the hairy-upstanding-ape creature were enChristed with the Crystal Light within, with the consent of the Hierarchy. We have also learned that some star people were present here in holographic form only – and these helped and taught the human – and other star people came here because their home world was finished. So in our history, star people have been coming and going and they have been helping the human to evolve since ages past. We have been learning about our origins and how we were helped.

We now learn that more enlightened beings are born – at this time and during the last century – and these are known as Indigo Children, Crystal Children and Rainbow Children. It is said that indigo children have a primarily indigo aura, and are the pioneers, the torch-bearers of transformation, many of whom went on to become parents for the later Crystal and Rainbow children. Crystal Children have the Crystal Consciousness and hold a specific energy and vibration which prepared the base for the beginning of the return and re-activation of stargates of the 4th and 5th Dimensions, from the passage of 21 December 2012. While these children are born in maya, illusion, in this 3D world of shape and form and limit, many do transcend maya and illusion during their lives.

Rainbow Children are now coming into birth for the first time as humans, and we now examine some astrological significances for these children. We have learned that astrology was a precise science which advised parents about the qualities and capabilities of their children. We further learned that the Rainbow Children are born under an ancient – lost – sign called Arachne, the sign of the spider, which is not included in any current form of zodiac. (See our article on The Universal Number 13.) When we examine the observed characteristics of Rainbow Children, we find matters which are not only indicated in the birth chart, but also indicated in what are called divisions of the birth chart, or Divisional Charts. Firstly, let’s take a look at the known characteristics of Rainbow Children.

We may verify much of these characteristics from transmissions by Cosmic Sai Baba, Jalarm the Atlantean and Alcheringa, the oversighting spirit guide for our corner of the galaxy. These members of the Hierarchy all tell that Star People come to Earth to be born in order to experience human love, the love that binds families. They come, they take human birth for the first time, they experience family warmth and bonding, they experience nurture, succour, and family love. The star peoples then internalise these attitudes, characteristics, embed them in their soul history and return to their home stars and planets in order to sow the seeds of love in those places. We have met such star people, and they are effusively loving, caring for their fellow man and woman and are most spiritual in their attitude, behaviour and vibration.

Looking at the hands of such star people, the lines on the hand resemble a spider-web of experiences; all their experiences are prepared and arranged for them in order that they partake warm, loving family experiences, know of human love and internalise this love in their psyche and in their actions. While many lines on hands often speak of young souls, these lines do not indicated what is called “fixed” or selected karma, hence, their life is a fruit of their choices.

In this regard, the birth chart does not reveal karma to be exhausted. The Divisional Charts known as the 12th, 40th, 45th all show the genetic code and lineage – what we call the family history – which these star people or Rainbow Children are born into. They are not here for personal karmic reasons. Their altar is an altar of compassion, they love and serve humanity in the here and now, and they serve their fellow star people in the next birth in their home star systems.

Due later than normal arrival of speech, many of these children are misdiagnosed autism, aspergers, ADD, ADHD, PDD and the like. This is because the Rainbow Children are born with the higher faculties already functioning and intact. They are not autistic, they are communicating in other ways, and hence, do not rely on speech in their early years. These comments are relevant to both Crystal and Rainbow children, many of whom show afflictions to Moon and Mercury in the first house in the Birth Chart with aspect or presence of the moons’ nodes also.

We have noted that communication comes in other ways for the Rainbow Children.
Afflictions in the birth chart simply indicates what behaviours will be shown in the body; the Rainbow Children have higher, psychic skills and gifts. When Rainbow Children are born they are already operating on other dimensions. The birth chart, for astrological purposes, indicates that we are all born in maya, illusion. These children are born with an awareness and consciousness that has to abide both illusion and the higher dimensions. So the birth chart will depict where and how this illusion will be experienced in life.

Light, Colour, Illusion and the Planets

We have said that the birth chart gives indications of the body and its immersion in maya (illusion). The role of the planets in astrology is to distribute the light of the Sun – and light from the Central Sun of all Universes – in specific bandwidth, with specific colour, harmonic, vibration and density according to the birth choices and karmic indications. The planets distribute energy to facilitate the roll-out of the soul blueprint and the path through the world of illusion. This world is all light (maya causes use to see, experience and develop in a 3-dimensional cause-and-effect reality). In this wise, planets send various hues and shades light to the mind-body-spirit complex in order for evolution and growth to take place. The planets have the capacity to raise us up and to pull us down; much depends on how we utilise them, a matter that most astrology – valid as it is – frequently overlooks. This has implications for Rainbow Children.

For Rainbow Children, the spectrum of light within is the full band of light in our 3D colour spectrum and more. The planets do not deny any vibrational light to rainbow children, for they birth with ability to take in light energy and vibration from other, higher sources: the 4th, 5th, 6th and even higher Dimensions. To our 3D perception there is the standard seven colour vibration; in the 4th, 5th, 6th and higher Dimensions, light has different colour harmonics, which are embedded with intensity of vibration and this intensity of vibration has ability for manifestation. So we understand that the full light spectrum (and other gifts of the higher dimensions) are possessed by these children. In astrology, these are shown in what is called the 9th Divisional chart, which deals with psycho-emotional matters, manifestation upon the “astral plane” perceived by the feelings and intuitive intelligence.

A Note for Parents

For parents of Rainbow Children, there may be specific challenges with allopathy and western medicine. Parents may feel at a loss on how to raise such children. Prayer is at all times powerful. The Hierarchy has shared, time and again, all we need to do is Ask for Help, and help will be given. For example, the Hierarchy has shared with us that Angels have no abode, they may travel to any time, any place, any when. Parents may call on their child’s Angels and guides for assistance and help for the Child. Parents may call on their own Angels – there are so many, ready and waiting – for help and assistance, for calm and inner guidance, at any time.

These are times of transformation, wherein we may all feel challenged and confronted when our normal resources, our normal responses seem to let us down or we feel we have nowhere to turn to. This is never the case, for the one virtue humanity has is choice: we may choose to seek the highest for ourselves, for our children, and for all beings in all the worlds. Our Rainbow Children have come here for the first time, for love, to love and serve mankind on the altar of compassion. Thought is powerful, and prayerful thoughts all the more so. Parents, call on the Child’s Angels and Guides, call on your own Angels and Guides. Help is always given; all you have to do is ask.

Rainbow Children are born with innate knowledge of the higher dimensions

Read The Children Who Lead